Members of the ‘NEVER AGAIN’ Association have shared their experiences of building solidarity with the people of Myanmar during an international conference ‘Myanmar’s Transition – from Where to Where?’ hosted virtually by the Myanmar Institute (Berlin) and the Institute of Middle and Far East of the Jagiellonian University (Krakow).

The conference took place on 25-27 May and it brought together academics and civil society activists from across the world.

Natalia Sineaeva provided a presentation on the topic ‘The Jewish Community in the Context of Pluralist Society in Burma (Myanmar)’. She stressed the history of the Jews in Myanmar (the small community currently consists of about 20 people) is an illustration of the social and cultural diversity of Myanmar which can be a positive resource in a future democratic society. She also presented the experiences of the ‘NEVER AGAIN’ Association in the field of cooperation and support for the Jews in Myanmar. 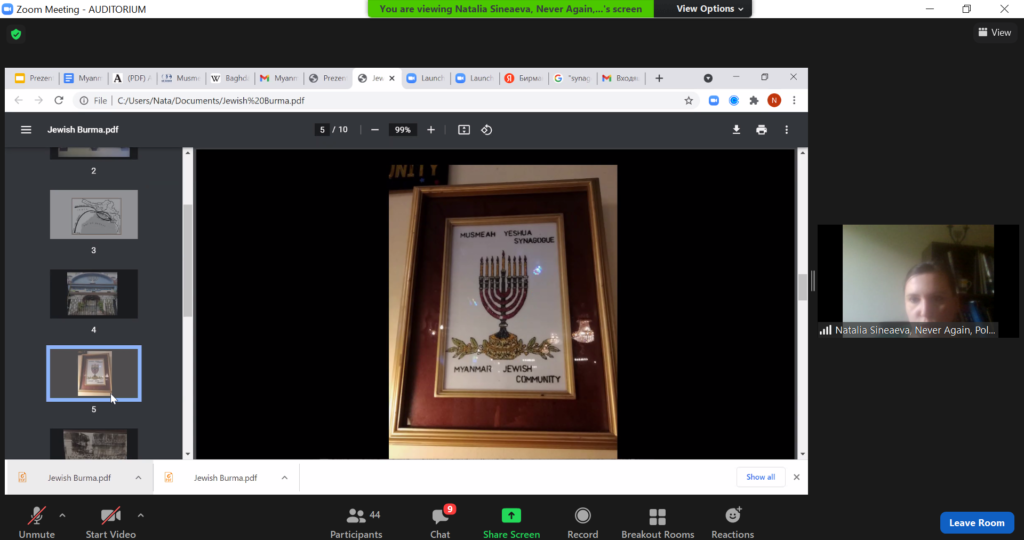 Rafal Pankowski spoke on the subject of ‘The Meaning of «Never Again» in Myanmar and Poland – Reflections on an Unexpected Relationship’. Among others, he presented the initiative ‘Identifying and Countering Holocaust Distortion: Lessons for and from Southeast Asia’, conducted by the ‘NEVER AGAIN’ Association in cooperation with partners in Myanmar, Thailand, and Cambodia with the support of the International Holocaust Remembrance Alliance (IHRA) and the Heinrich Boell Stiftung Cambodia.

The project deals with various forms of genocide distortion and denial, including the denial of the crimes of the Khmer Rouge or anti-Rohingya violence. The initiative draws on the legacy of the Holocaust and instances of genocide in Southeast Asia to inspire critical memory discourses. It promotes solidarity with those who are discriminated against and oppressed. Pankowski highlighted the cooperation between ‘NEVER AGAIN’ and civil society groups and human rights activists from Myanmar, which is especially important since the military coup which took place on 1 February 2021, and the subsequent crackdown on dissidents.

In another example of the ongoing ‘NEVER AGAIN’ activity, Rafal Pankowski presented its trans-national educational initiatives during a global conference of the Alliance Against Genocide which took place on 26 May. The Alliance Against Genocide is an international coalition dedicated to creating the international institutions and the political will to prevent genocide. It is composed of 96 member organizations in 31 countries, including the ‘NEVER AGAIN’ Association.

On 20 May (Cambodia’s Day of Remembrance for Genocide Victims), a member of the ‘NEVER AGAIN’ Association, Natalia Sineaeva, presented the issue of genocide commemoration in Cambodia and Bangladesh at the invitation of the Jewish Museum and Tolerance Centre, Moscow.