During the biggest open-air free music festival in Europe, Pol’and’Rock (4-6 August), also known as Polish Woodstock, the ‘NEVER AGAIN’ Association organized a football tournament promoting the message of ‘Let’s Kick Racism out of the Stadiums’, involving teenage players who are refugees from Ukraine. Together with the other participants, they manifested their protest against the war.

On another festival day a meeting was held with the rock band Strachy na Lachy (Empty Threats) at the information stand of the ‘NEVER AGAIN’ Association. For many years, this group has been involved in the activities of the ‘Music Against Racism’ campaign run by ‘NEVER AGAIN’. Krzysztof ‘Grabaz’ Grabowski, the leader of Strachy Na Lachy, explained his band’s involvement in support of the refugees from Ukraine after the outbreak of the war. Some of the musician’s family came from Volhynia (a previously Polish territory, now a region in Ukraine). In press interviews, ‘Grabaz’ emphasised the importance of having neighbours of different nationalities and how it can lead to outbursts of creativity: ‘If in some place different cultures coexist peacefully with each other, then they will undoubtedly develop that place and its culture’. 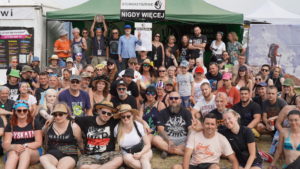 – ‘During our meeting with Strachy Na Lachy, we talked primarily about war and peace, about respect and prejudice in everyday life, about hate speech and how it can lead to violence. We asked the band to explain how music can create a better world,’ said Joanna Naranowicz, a representative of the ‘NEVER AGAIN’ Association and the lead singer of the punk band Qulturka.

During the Pol’and’Rock Festival, the ‘NEVER AGAIN’ Association had the honour of hosting many other bands of different music styles involved in the ‘Music Against Racism’ campaign. 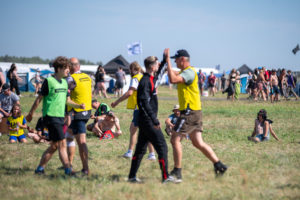 The ‘Lets’ Kick Racism out of the Stadiums’ tournament has been organised for over twenty years by the ‘NEVER AGAIN’ Association at the Polish Woodstock/Pol’and’Rock Festival. In 2022 it was co-organized with the grass-roots football team FC GAN Pila and supported by FARE network and the Adidas Football Collective through its grassroots support programme. Tournament’s male and female participants jointly express their support for the ideas that guide the entire festival: peace, friendship and respect for diversity. This year, the message resonated particularly strongly with young players from Ukraine who had had to flee the cruelty of war. 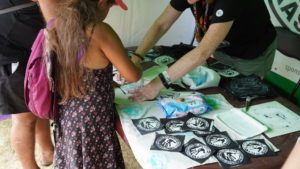 During the Pol’and’Rock Festival, the ‘NEVER AGAIN’ Association also organised educational workshops on volunteering and supporting refugees. At NEVER AGAIN’s information stand, there were also practical worskhops on designing anti-racist DIY sew-on patches and t-shirts with the use of stencils and paints. The resulting items of clothing with the message ‘Music Against Racism’ were presented to the participants! 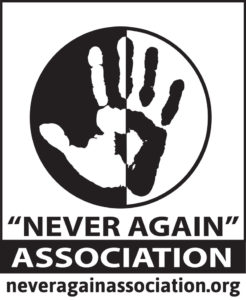 The ‘NEVER AGAIN’ Association is an independent anti-racist organization founded in Warsaw in 1996. It has campaigned against antisemitism, racism and xenophobia, and for peace, intercultural dialogue and human rights both in Poland and internationally. ‘NEVER AGAIN’ has conducted the first anti-racism campaign in Eastern European football, ‘Let’s Kick Racism Out of the Stadiums’ and is a founding member of the FARE network.