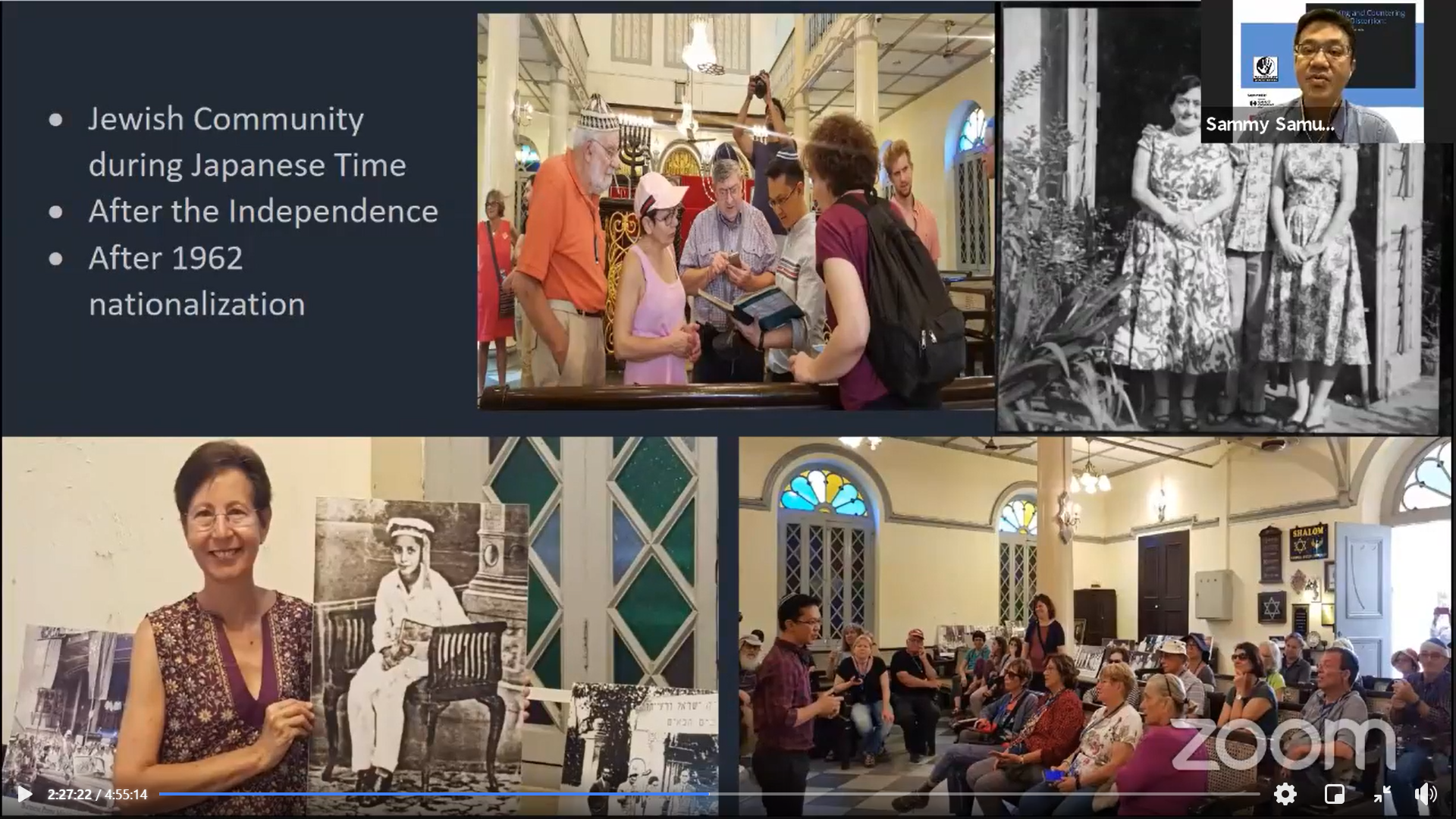 More than 1,200 people from across the world registered for participation in the symposium ‘Identifying and Countering Holocaust Distortion: Lessons for and from Southeast Asia’ on 23-26 November 2021. 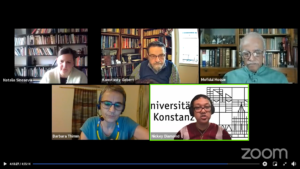 The online event was organized by the ‘NEVER AGAIN’ Association in cooperation with the Balac Program of the Faculty of Arts, Chulalongkorn University, Bangkok (Thailand) and the American University of Phnom Penh (Cambodia), with the support of the International Holocaust Remembrance Alliance (IHRA) and Heinrich Boell Stiftung Cambodia. The participants came from all the world’s continents with a majority coming from the region of Southeast Asia. 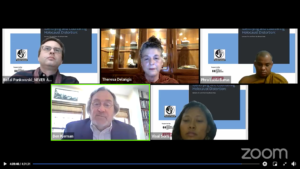 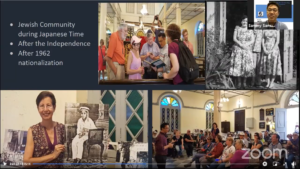 Presentations linking the memory of the Holocaust with the history (and the present) of Southeast Asia were delivered by, among others, Dr Verita Sriratana (Chulalongkorn University, Bangkok and Raoul Wallenberg Institute of Human Rights and Humanitarian Law, Lund University) and Dr Maung Zarni (Documentation Center Cambodia and Free Rohingya Coalition). Sammy Samuels, the leader of the Jewish community in Myanmar (Burma) shared the story of Myanmar’s Jews and his work to commemorate the Holocaust and promote the country’s diversity. 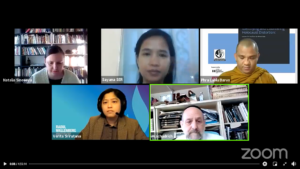 A session on counteracting genocide denial in the frame of interfaith dialogue was conducted by the Chief Rabbi of Poland Michael Schudrich and Venerable Lablu Barua (Mahachulalongkornrajavidyalaya University, Ayutthaya, Thailand).

– ‘Thank you to the NEVER AGAIN Association for really making these cross-cultural dialogues possible’ – said Dr Theresa Delangis, the Director of the Center for Southeast Asian Studies and Professor in Global Affairs and Humanities at the American University of Phnom Penh.

The symposium was preceded by a series of workshops and meetings for civil society groups, museums and memorial sites’ staff, academics, and faith leaders. – ‘We have a broad network of colleagues and friends, experts and civil society activists in Southeast Asia and beyond’ – said Professor Rafal Pankowski of the ‘NEVER AGAIN’ Association in his final remarks during the symposium. – ‘We are going to continue our communication and cooperation.’

The recordings of all of the sessions will be available on the ‘NEVER AGAIN’ Association’s website and social media profiles. Future activities in the frame of the project ‘Identifying and Countering Holocaust Distortion: Lessons for and from Southeast Asia’ include publications as well as a digital exhibition on the subject.

Facebook and Twitter Must Act Responsibly, Protect Their Users and Democracy by Removing Organizing Pages for the March

In recent years, the Polish Independence Day March has attracted tens of thousands of participants led by far-right extremists and hate groups from Poland and many other countries, making a name for itself as one of the largest far-right gatherings in the world. The annual march, which often descends into violent clashes, is similar to what the USA witnessed at the 2017 Unite the Right rally in Charlottesville, Va., but on a much larger scale, with up to 250,000 participants taking to the streets in recent years.

The march has turned into a magnet for the global far right.

– ‘It’s hard to escape the antisemitic, white nationalist, and anti-LGBTQ hate spewed among the red clouds of smoke billowing from rockets and flares shot off by marchers,’ said Wendy Via, co-founder of the Global Project Against Hate and Extremism.

In 2020, as in previous years, there were multiple injuries during the march, including among police officers. Along the route of the march, a flat was set on fire because of a rainbow flag displayed in a window at the building. 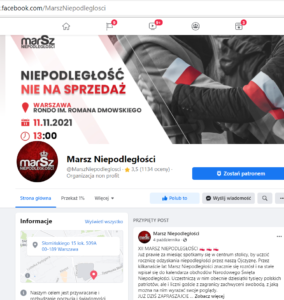 This year again, Facebook and Twitter are both playing a role in promoting and fundraising for the march, by allowing the pages operated by its organizers. A few years ago, the ‘Independence March’ fan page was removed, but quickly restored to Facebook.

Global Project Against Hate and Extremism and the ‘NEVER AGAIN’ Association, based in Poland, want to see the promotion and fundraising for this event on Facebook and Twitter stopped immediately.

This year, there is even a greater threat of violence, especially against women. The march, slated for November 11, has been banned by the Polish courts and a women’s demonstration is scheduled to take place along the same route instead. Although Warsaw mayor Rafal Trzaskowski has said ‘if the nationalists congregate on November 11, it will be unlawful assembly,’ the organizers said they are planning on marching and will not change their route despite the court’s ban.

– ‘The fact this event has drawn so many far-right groups with a tacit support of the ruling party, and that extremists from around the world travel to participate illustrates the crisis of democratic values in Poland and elsewhere,’ said Rafal Pankowski, co-founder of the ‘NEVER AGAIN’ Association.

Even with this year’s march banned by the courts, Facebook is maintaining the page promoting a potentially violent event already deemed illegal by the Polish courts. The page has more than 257,000 followers. Among many other posts, their pinned post advertises and fund raises for the event, calling for supporters to ‘HELP US organize the biggest patriotic manifestation in Europe.’

Twitter has a much smaller presence in Poland, but the tech company is also allowing for the promotion of and fundraising for this event, on a page that has more than 25,000 followers. The main organizer, Roman Bakiewicz, with more than 26,000 followers himself also posts about the upcoming march.

In light of the recent Facebook document leaks, there is no question that hateful non-English content has a much greater chance of remaining on the platform. A recent ‘Washington Post’ study showed that Facebook’s algorithm drives polarizing and negative political content in Poland. And from GPAHE’s earlier reporting, it is known that Twitter has allowed antisemitic and anti-LGBTQ content to remain.

Facebook and Twitter have allowed the march’s organizers to promote and fundraise for this hateful event for years.

– ‘Facebook and Twitter claim they have systems in place to get hate off their platforms and moderate content in potentially violent situations – they need to walk their talk,’ said Via. ‘These companies must act and stop their platforms from promoting a far-right, unlawful event that is definitely going to spread hate and will likely once again turn violent.’

Both ‘NEVER AGAIN’ and Global Project Against Hate and Extremism have contacted Facebook and Twitter to ask that they do not allow for promotion of or fundraising for this march on their platforms.

Launched in 2020, the Global Project Against Hate and Extremism (GPAHE) was founded by Heidi Beirich and Wendy Via to address the gap in efforts to stop transnational hate and far-right extremism movements, particularly US-based activity that is exported to other countries and across borders.