On 22-25 July 2018, members of ‘NEVER AGAIN participated in the conference on ‘Dealing With The Past: Aspects of Trauma and Healing’ held in Phnom Penh by the Heinrich Boell Foundation (Cambodia Office) in cooperation with Metahouse Cultural Centre and First Step Cambodia. The conference was a follow-up to the seminars on dealing with the past and genocide commemoration organized by the Heinrich Boell Foundation (Cambodia) and the ‘NEVER AGAIN’ Association in Phnom Penh and Warsaw in 2017.

Representatives of ‘NEVER AGAIN’ once more paid tribute to the victims at the Tuol Sleng Genocide Museum and met with Chum Mey, one of the seven survivors of the Tuol Sleng torture and extermination centre, the leader of the Association of Victims of the Khmer Rouge Regime. During the conference, members of ‘NEVER AGAIN’ presented their perspectives on Holocaust commemoration and the current efforts in the global fight against hate speech and hate crimes.

The Phnom Penh conference was coordinated by Ali Al-Nasani, the director of the Heinrich Boell Foundation Cambodia Office and Dara Bramson, an interdisciplinary researcher and a longtime friend of the ‘NEVER AGAIN’ Association.

On 30 July, the ‘NEVER AGAIN’ Association initiates a movie evening and a panel discussion about Angelina Jolie’s recent film on the Cambodian genocide, ‘First They Killed My Father’. The event is held at Chulalongkorn University in Bangkok (Thailand) in cooperation with the Rotary Peace Fellowship Program, with the participation of expert speakers from Cambodia, Thailand, Poland, the US, and Germany.

On 19 July, representatives of ‘NEVER AGAIN’ took part in the launch of the report ‘They Gave Them Long Swords. Preparations for Genocide and Crimes Against Humanity Against Rohingya Muslims in Rakhine State, Myanmar’, published by the South-East Asian human rights NGO Fortify Rights. The event took place at the Foreign Correspondents’ Club in Bangkok. The report was presented by Kerry Kennedy, daughter of the late US attorney general Robert F. Kennedy and president of Robert F. Kennedy Human Rights, who had concluded visits to Myanmar and Bangladesh with a high-level delegation in the preceding days. Ms Kennedy was joined by the former US Congressman Tom Andrews and the Myanmar human rights advocate Nickey Diamond. – ‘License to slaughter one group is license to slaughter others’ – said Kerry Kennedy. – ‘From Germany to Cambodia, from Bosnia to Rwanda, again and again we have learned the same lesson, until there’s accountability, the risk of repeated attacks of increasing severity is not just likely, it’s guaranteed.’ 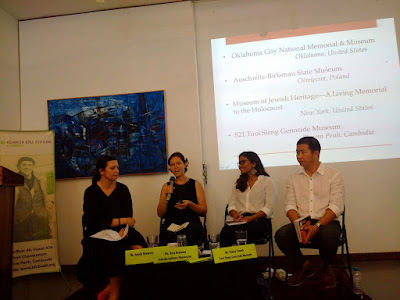 – ‘The motto of NEVER AGAIN must not stop with the commemoration of past atrocities, but it has to be a living commitment. We have a long-term dedication to cooperation with our partners across South-East Asia and are determined to assist in all efforts for peace’ – said a representative of the ‘NEVER AGAIN’ Association, Natalia Sineaeva-Pankowska, who is also a Rotary Peace Fellowat Chulalongkorn University.

The ‘NEVER AGAIN’ Association was founded in 1996 by Marcin Kornak, a Polish poet and activist.6. It has campaigned against racism, antisemitism and xenophobia, for peace, intercultural dialogue and human rights both in Poland and internationally. It has conducted anti-racist educational campaigns in the field of music and sports and it has been personally supported by numerous figures including Barack Obama, Bernie Sanders, Lech Walesa, the Dalai Lama and the Duchess of Cambridge Kate Middleton. Stieg Larsson, the late Swedish jo‎urnalist and crime writer, was among the first friends and supporters of ‘NEVER AGAIN’.