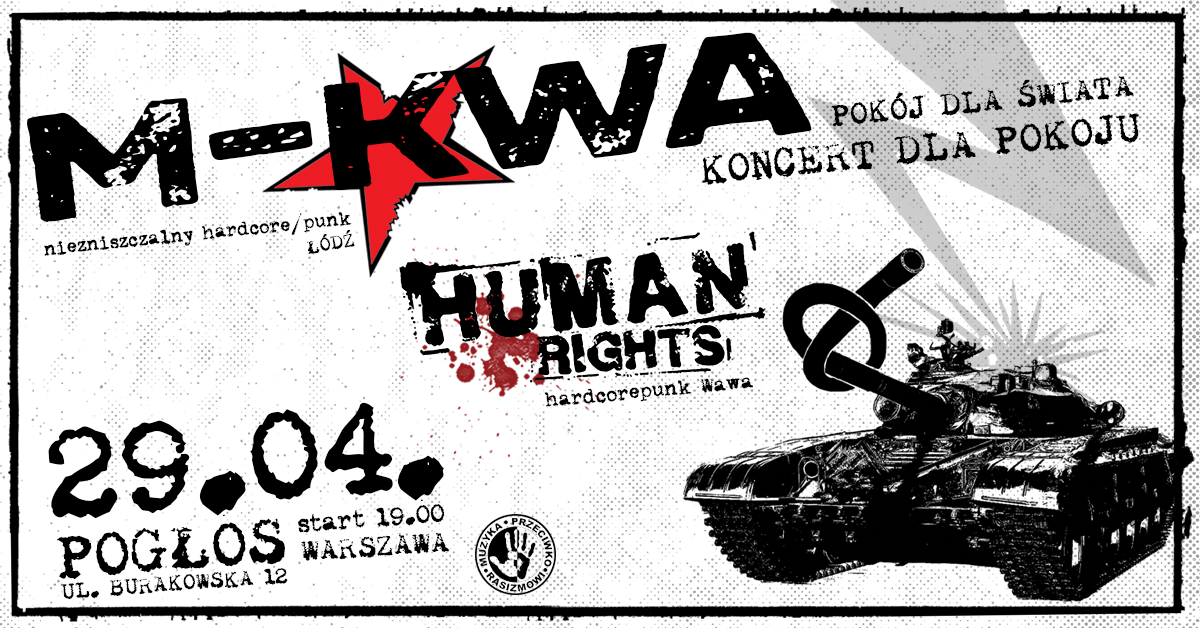 The new album entitled ‘Zaraza’ (Plague) by the band Human Rights was released in partnership with the ‘NEVER AGAIN’ Association’s campaign Music Against Racism. The record was launched during the ‘Peace for the World’ concert on April 29 in Warsaw. Human Rights were joined on stage by M-kwa, one of the most renowned bands of the Polish punk rock scene. 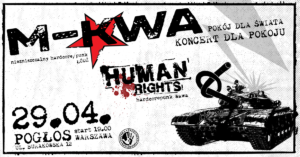 According to the members of Human Rights, ‘The album <Plague> was recorded as a protest against political depravity and the epidemic of intolerance.’ The songs include reflections on ‘what attitudes people adopt in the face of a pandemic, war, dictatorship, lack of mutual respect and tolerance, aggression. It is not without reason that the word <plague> appears in the lyrics of every track.’

Human Rights is a hardcore punk band from Warsaw. For years, it has been supporting the Music Against Racism campaign of the ‘NEVER AGAIN’ Association. The band describes its work as ‘energetic music and positive and direct lyrics coming out of irritation at intrusive attempts to manipulate our lives only because of differences in sex, views, religion or nationality. So there is fire and fury, there is also some melody and catchy choruses about freedom, respect, compassion, tolerance.’

M-kwa (previously known as Moskwa) is one of the most original and charismatic bands of the Polish punk rock scene. The band was established in 1983 in Lodz and famously played at the festival in Jarocin (the largest festival of alternative music in Eastern Europe in the 1980s). The band’s performance at Jarocin was immortalized in the BBC documentary ‘My Blood, Your Blood’. For years, the band has been supporting the Music Against Racism campaign of the ‘NEVER AGAIN’ Association.

From the first days of Russian military aggression against Ukraine, numerous bands have played concerts with an anti-war message supported by the ‘NEVER AGAIN’ Association. During these events, actions to provide aid for Ukrainian refugees have also been organized. For instance, on 2 April, the ‘Art Will Help – Benefit for Krzemieniec in Ukraine’ concert took place in Warsaw, with the participation of the bands Human Rights, HairyCane and Dlonie. The legendary Polish punk rock band Dezerter, which has been cooperating with the ‘NEVER AGAIN’ Association for many years, has also played anti-war concerts in Mogilno, Ciechanow, Poznan, Olsztyn, Bialystok and other locations.

In turn, on 7 May in Poznan, under the motto of Music Against Racism, the concert ‘Punks are Playing for Ukraine’ will take place. The following bands will be spreading a message of peace: Uliczny Opryszek, NoG, Amunicja, and Izerbejdzan.

The ‘NEVER AGAIN’ Association encourages musicians, record labels and promoters from all over the world who are interested in releasing music tracks or videos as well as organizing concerts with the promotional support of the Music Against Racism campaign to get in touch via email: info@neveragainassociation.org .

The ‘NEVER AGAIN’ Association is an independent organization founded in Warsaw in 1996. It has campaigned against fascism, racism and xenophobia, for peace, intercultural dialogue and human rights both in Poland and internationally.

Human Rights ‘Plague’ (from the album ‘Plague’ in partnership with the Music Against Racism campaign):