The ‘NEVER AGAIN’ Association has welcomed the International Court of Justice ruling on the case concerning genocide against the Rohingya minority committed in Myanmar (Burma).

The ICJ, based in The Hague (Netherlands), ruled on 23 January that Myanmar must protect the Rohingya population. The court ordered Myanmar to take emergency measures to prevent genocide against the Rohingya. 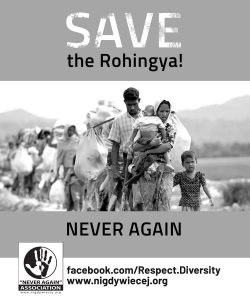 Co-founder of ‘NEVER AGAIN’ Rafal Pankowski was present in The Hague on the day of the ruling. He said: – ‘We welcome the ICJ decision and hope justice for the Rohingya will be delivered. Myanmar’s greatness is to be found in her diversity and the Rohingya must be treated with respect, their rights as citizens must be fully restored, their suffering must be recognized and compensated. Symbolically, the ICJ ruling was announced just days before the 75th anniversary of the liberation of Auschwitz-Birkenau on 27th January, the International Holocaust Remembrance Day. Genocide and genocide denial must not be ignored by the international community.’

The Rohingya have been described by the United Nations as the world’s most persecuted ethnic minority.

Also on 23 January, in the run up to the International Holocaust Remembrance Day, the ‘NEVER AGAIN’ Association’s representative Anna Tatar delivered a keynote speech at a conference on ‘The Rise of Hate Crimes and the Role of Youth in Countering Them’, co-organized with Warsaw’s Collegium Civitas university and the Youth for Peace student group under the heading ‘Varsovians against Violence’. Students coming from numerous countries and continents demonstrated their solidarity with the victims of hate crimes and hate speech in Poland and elsewhere.