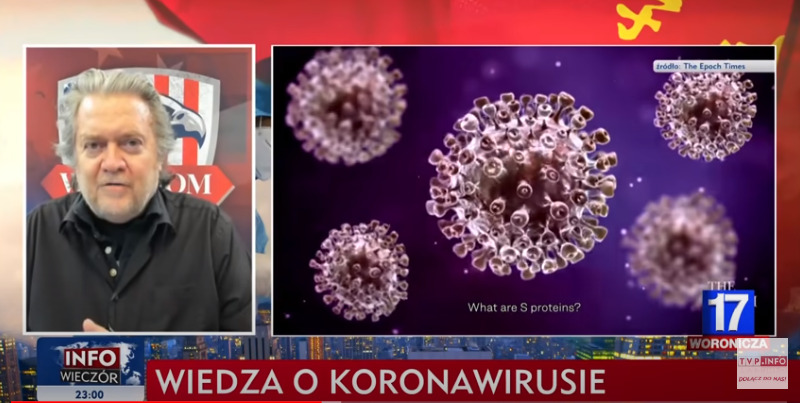 The ‘NEVER AGAIN’ Association has echoed the United Nations Secretary General Antonio Guterres’ warning against ‘the tsunami of hate and xenophobia’ sparked by the coronavirus pandemic. The Warsaw-based organization has published its latest REPORT ‘The Virus of Hate: Brown Book of the Epidemic’. The report documents acts of racism, xenophobia and discrimination which have occurred in the context of the coronavirus in Poland in recent weeks and months.

The authors of the report recorded cases of assaults on members of minorities who are unjustly blamed for spreading the virus, as well as numerous examples of hate speech and conspiracy theories about the pandemic spread by the far right.

The descriptions collected on over 30 pages include the following events:

– On 1 March, during mass in the St. Michael Archangel church in Wroclaw Fr. Leonard Wilczynski, belonging to the Salesian order, stated in his homily that the COVID-19 pandemic is ‘God’s punishment for living in the sin of homosexuality’. He also added that the Chinese ‘are dirty, eat bats and dead fetuses’.

– On 25 March in Sosnowiec three men attacked a female of Chinese descent – a scientific worker of the Silesian University. The victim said: ‘They surrounded me, I was so afraid – even now I am trembling. They kept shouting «virus» and «China»’. She also added: ‘I do not feel safe here as a woman of Chinese descent’.

– On 8 April in Szprotawa local media reported that a security guard of the local supermarket refused a Ukrainian man entrance to the store on the grounds of his nationality. One witness to the event reported: ‘When the young man wanted to enter the store, the security guard asked him if he was Polish or Ukrainian. When he replied that he was Ukrainian, he was told that he could not go inside’. The employee’s xenophobic behaviour stemmed from the false belief that all persons of Ukrainian origin in the town were carriers of COVID-19.

– On 8 April, Radio Wnet in Warsaw presented its listeners with a special programme introducing a conspiracy theory pertaining to the COVID-19 pandemic, advocated by well-known British extremist, David Icke. According to Icke, the responsibility for the pandemic rests with a secret global group, described as a ‘cult’, with which ‘madmen from Silicon Valley’, the World Health Organization, the British heir to the throne Prince Charles, and entrepreneur Bill Gates are connected.

– In the second half of April in Poznan, in the middle of the night, unknown perpetrators smashed the windows of a flat occupied by a Filipino man, who has been living in Poland for ten years. A report about it was broadcast on 23 April on the television channel, TVN24, and that night, there was a second attack on the flat, with stones once again being thrown. According to the victim, both attacks were associated with the COVID-19 epidemic and hostility towards people of Asian origin. ‘Some Filipinos experience incidents of people shouting «corona!» after them on the streets. One of the Filipinos was spat in the face and called «Chinese». We are very afraid’ – he said.

– On April 25 Grzegorz Braun, a Member of Parliament representing the Confederation party, shared his views on the pandemic in an interview on YouTube: ‘Jew-communists are trying to use the coronavirus to get rid of Trump […]. Bill Gates is heading for a situation in which each person on this globe will need to legitimise  his or her existence with a certificate of kosher standard’. On 6 May, during a speech in the Polish Parliament, Braun made threats of death by hanging to the Minister of Health, Lukasz Szumowski, in reaction to sanitary measures introduced in the preceding weeks in connection with COVID-19. On 8 May in Warsaw Braun together with Piotr Rybak (who had been convicted for publicly burning an effigy of a Jew in Wroclaw in 2015) participated in skirmishes with the police during a protest against sanitary restrictions imposed to combat the epidemic. 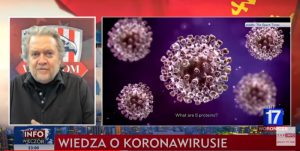 – On 9 May, TVP Info, a Polish state-run television channel, broadcast a thirty-minute conversation with Steve Bannon, an idol of the international alt-right movement and former advisor to Donald Trump. Bannon presented an ideological conspiracy theory on the COVID-19 pandemic, using military rhetoric. He stated: ‘This is really a serious matter, and I think that every leader in every country in the world should listen when the commander in chief of the US Armed Forces [the President] says that we have been attacked just like at Pearl Harbour and this time the Chinese are responsible. […] The real dark days are ahead, […] now they are turning to a kinetic type of war. […] This was like an order of assassination. The death of each person, each nurse, each doctor can be blamed on the Chinese Communist Party’.  He also added a confrontation with China was inevitable and said: ‘This is our goal, our destiny’.

According to the research carried out in April 2020 by the Centre for the Study of Democracy at the University of Social Sciences and Humanities in Warsaw, as many as 45 percent of Poles believe in conspiracy theories alleging that ‘some foreign forces or countries intentionally spread the coronavirus’ and only 42 percent recognize its natural origin confirmed by scientific knowledge.

Rafal Pankowski, a co-author of the report of the ‘NEVER AGAIN’ Association and a sociology professor at the Collegium Civitas university, commented: – ‘The global pandemic is also a global crisis of social trust and values amid confusion and anxiety. It is fertile ground for the dangerous growth of xenophobia and conspiracy theories. For the first time in Polish history we are dealing with such a wave of hatred against people of Asian origin, but the antisemitic stereotypes are also present, together with hostility and contempt for various other groups – for example Roma, Africans, Ukrainians, Americans, Russians, as well as Muslims, refugees, LGBT people, environmentalists, vegans, and others’.

– ‘Unfortunately, the media are also involved in promoting conspiracy theories about the coronavirus, often inviting people with extreme views as experts. These «experts» are also gaining popularity on the web, where antisemitic and xenophobic content is distributed on a massive scale. Companies such as YouTube and Facebook, contrary to their formal announcements, often tolerate such content on their platforms’ – said Dr. Anna Tatar, co-author of the ‘Brown Book’.

– ‘Examples of hatred are unfortunately coming from the top. In a pandemic, conspiracy theories promoted by public figures: celebrities, artists, politicians, journalists and clergy are particularly alarming’ – adds Jacek Dziegielewski, also a co-author of the ‘NEVER AGAIN’ Association report.

The ‘NEVER AGAIN’ Association is an independent organization established in Warsaw in 1996. It has campaigned against racism, antisemitism, and xenophobia, both in Poland and internationally. Among others, it is a member of the International Network against Cyber Hate (INACH), which brings together organizations from twenty countries fighting hatred and discrimination on the Internet. Together with partners from Estonia, Slovakia, Romania and Spain, it conducts research on hate speech as part of the Opcode: Open Code for Hate-Free Communication project.