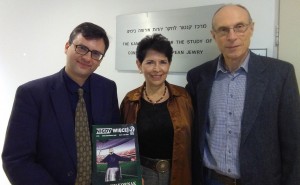 News from the ‘NEVER AGAIN’ Association

Members of the ‘NEVER AGAIN’ Association have participated in a series of meetings in Israel in late December and early January, including the international conference of senior educators on ‘The Shoah and Jewish identity’ held at Yad Vashem Institute (Jerusalem). Dr Rafal Pankowski, a co-founder of ‘NEVER AGAIN’, was invited to give a presentation about the current state of antisemitism and xenophobia in Poland at the Tel Aviv University Kantor Centre for the Study of Contemporary European Jewry headed by Professor Dina Porat. The presentation, followed by a lively discussion, was held at the Tel Aviv University campus on 1 January 2017. 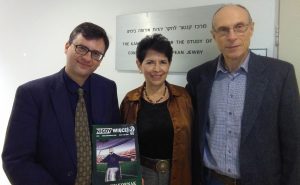 Although the number of Jews is today’s Poland is very small, antisemitism is present in the public discourse in various settings: from the football stadium to academia and church. Antisemitism can be seen as a paradigmatic form of prejudice, a popular expression of hostility to liberal democracy in Poland and other countries in the region of Central and Eastern Europe. The linkage between antisemitism ‎and the rapid rise of other types of xenophobia was stressed during the debate. It was illustrated by the spectacular burning of an effigy of a Chasidic Jew during an anti-refugee demonstration organized by the neo-fascist National-Radical Camp (ONR) in Wroclaw in November 2015.

Radio Maryja, the nationalist-Catholic radio station run by the Redemptorist order, has been the single most powerful disseminator of antisemitic discourse for the last 25 years, as documented in numerous reports by the ‘NEVER AGAIN’ Association, the Anti-Defamation League, the Council of Europe, and other organizations. According to the US State Department report on Global Antisemitism to the Congress in 2008, ‘Radio Maryja is one of Europe’s most blatantly anti-Semitic media venues.’

Radio Maryja’s founder, Father Tadeusz Rydzyk, himself has frequently engaged in antisemitic speech on air, e.g. he routinely referred to Polish State Television as ‘TELAVision’, suggesting it was dominated by Jews. In one of his broadcasts, Rydzyk openly degraded the Jewish religion: ‘I call it ai vai shalom. It is clearly a religion of trade. It is trade, and not religion.’

Surprisingly, Rydzyk was received as a guest by the current Israeli Ambassador to Warsaw, Anna Azari, in September 2016. The publicized meeting was met with raised eyebrows among Polish civil society and an open letter of protest to the embassy was written by several highly respected figures in the Polish Jewish community, such as Konstanty Gebert, Stanislaw Krajewski, and Joanna Sobolewska-Pyz. The ‘NEVER AGAIN’ Association expressed its disappointment, too. Nevertheless, the contacts between the Israeli Embassy and Radio Maryja continued and the embassy was represented at ceremonies organized by Father Rydzyk in his powerbase, the city of Torun. Another meeting took place on 26 November 2016 in the form of a shabbat dinner attended by Father Rydzyk, Ambassador Azari, the Director of the Zionist Organization of America Morton Kleinand, and Deputy Speaker of the Knesset Yehiel Bar (Labour Party).

– ‘I believe it is a moral and political mistake to enter into such unholy alliances with Father Rydzyk’ – said Rafal Pankowski who is an Associate Professor in Sociology at Warsaw’s Collegium Civitas. – ‘It amounts to legitimizing Radio Maryja and its xenophobic ideology.’ ‎He pointed to the fact Radio Maryja continues to promote radically antisemitic views. For example, during a religious ceremony broadcast on Radio Maryja and its associated TV network on 3 September 2016, Father Rydzyk reprimanded the faithful by shouting: ‘This is not a synagogue!’ ‎On 5 October 2016, the regular Radio Maryja commentator Stanislaw Michalkiewicz read his column on air saying: ‘The Jewish circles in Poland are tasked with providing the European Commission with as many proofs as possible that democracy and the rule of law in our unhappy country is threatened by the fascist regime.’‎ On 20 October 2016, Michalkiewicz authored another lengthy antisemitic rant, saying among others: ‘Today the mischevious Jews understood what it is about and they transformed themselves into liberals.’ On 23 November 2016, Radio Maryja aired Michalkiewicz’s weekly antisemitic broadcast in which he alleged ‘the Jewish lobby in Poland demonstrates its racial solidarity with the Ukrainian oligarchs.’ In December 2016, Michalkiewicz toured Polish churches and cultural centres in the US, spreading his antisemitic conspiracy theories.

– ‘The levels of far-right activity, hate speech and hate crime in Poland have risen rapidly since the summer of 2015’ – said Rafal Pankowski. – ‘They must be condemned and confronted, not ignored or condoned.’