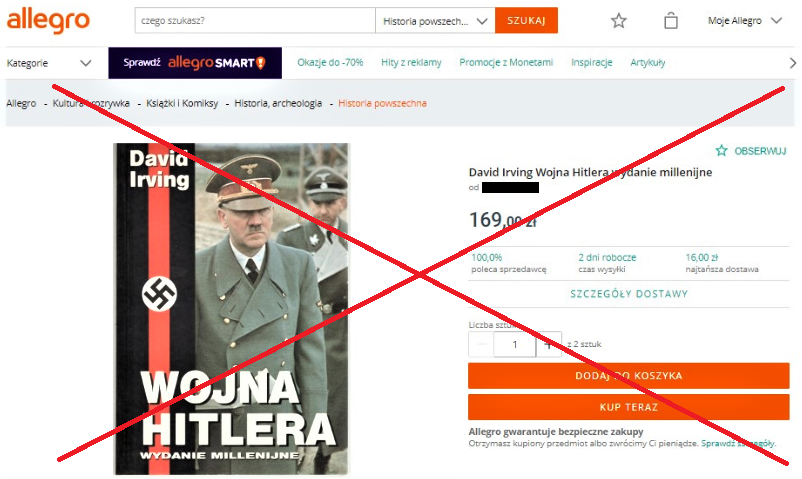 The ‘NEVER AGAIN’ Association has managed to remove more than 3,500 items with fascist and antisemitic content through its cooperation with the major online sales platform Allegro. These included numerous copies of contemporary editions of Hitler’s ‘Mein Kampf’ without critical commentary as well as books by David Irving, a rabidly antisemitic pseudo-historian who has denied the existence of gas chambers in Auschwitz and the extermination of six million Jews during World War II.

Irving calls Auschwitz a ‘Disneyland’. For peddling such ideas in public, in 2006 he was sentenced to prison by a court in Austria. In 2007, thanks to an intervention by ‘NEVER AGAIN’ and the Auschwitz-Birkenau Museum, he was removed from the International Book Fair in Warsaw. In September 2019, Irving with a group of followers planned another ‘sightseeing trip’ through the former death camps. The Polish Ministry of Foreign Affairs stated that his theories are unacceptable under the Polish law and he would not be allowed to enter Poland.

– ‘Upon our recommendations, Allegro removes such items, even though new ones continue to pop up and need to be removed, too; this requires much effort and commitment,’ said a member of the ‘NEVER AGAIN’ team Jacek Dziegielewski. Dr Anna Tatar, also a ‘NEVER AGAIN’ Association representative, adds: ‘The final decision on removal is always taken by Allegro, but in almost all the cases our interventions were successful. We have formed a partnership which allows us to counter racist and fascist propaganda very effectively. And we are talking about the biggest internet sales platform in the region of Central and Eastern Europe, with more than 21 million registered users, at a time of a general growth of antisemitic and racist hate speech in our society.’

The offers reported by ‘NEVER AGAIN’ included newly-made Third Reich flags and SS uniforms, records with Nazi music, lighters with an image of Hitler, or pendants with Mussolini.

Moreover, in cooperation with ‘NEVER AGAIN’ Allegro removed books by SS officer Leon Degrelle who praised Hitler after the war and denied the Holocaust, by Hennecke Kardel who claimed that the Jews themselves were responsible for the Holocaust, and publications glorifying the Iron Guard, a Romanian fascist group who murdered many Jews.

The legal basis for deleting the auctions are Articles 256 and 257 of the Polish Penal Code together with the provisions in Appendix No. 1 to the Allegro Code of Conduct. In 2018, the ‘NEVER AGAIN’ Association became a partner to Allegro’s programme of ‘The Rights Protection Cooperation’ and since then helps eliminate offensive content from the platform.

The ‘NEVER AGAIN’ Association is an independent anti-racist organization established in Warsaw in 1996. Among others, it is a member of the International Network against Cyber Hate (INACH), which brings together organizations from twenty countries fighting hatred and discrimination on the Internet.